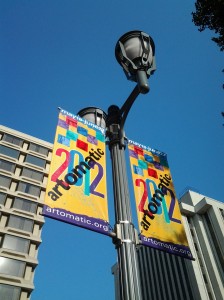 I’m looking forward to playing a selection of MetroSongs at the Artomatic festival in Crystal City, VA on June 2 at 4 pm. I’ll be on keyboards with Jason Mendelson and the Open Doors.

All I know about this event is what I read in the papers (to paraphrase Will Rogers); apparently Artomatic is what happens when a bunch of artists and musicians take over an 11-story office building in near-suburban northern Virginia. We’ll be on the 10th floor on the main stage.

By the way, if you’re interested in experiencing MetroSongs before the show, you can check out some videos of our live performances, and of course listen to the songs themselves.

We had a full house at the Electric Maid on Saturday for the Classic Albums 1986 showcase. I was thrilled to join Jason Mendelson and the Open Doors for a re-creation of Elvis Costello’s Blood and Chocolate album. Great work all around by the other musicians on the bill as well.

Jason’s next project is to go back to 1977, a great year for rock and pop albums (and yes, I was there at time to hear some of them). We’re still figuring out which album to take on.

One of the perhaps less-notable albums of that year was Chicago XI. That album did have one big hit, “Baby, What a Big Surprise,” and another number, “Vote for Me,” that strangely echoes what we’re hearing this election year:

I’m excited about an upcoming non-jazz gig, at the Artisphere in Rosslyn on Tuesday December 20. I’ll be part of the MetroSongs band, backing singer-songwriter Jason Mendelson. Jason will be featured in this installment of the “Words and Music” series, where he will talk about his process and perform (alone and with the band) several of the songs from the MetroSongs project.

According to the Artisphere web site, the show starts at 7:30 PM and costs $8 ($6 for seniors). Should be a fun show!